A Brief Timeline of Events

1980: Construction begins on a nearby 40-acre Girls Country campus.

1992: Boys Country has now grown into a beautiful oak-shaded campus of 166 acres with 20 buildings while Girls Country has eight buildings.

1993: Boys Country and Girls Country are combined and the organization is renamed Boys and Girls Country of Houston, Inc. Each cottage is set up to accommodate eight children. Houseparents (now called Teaching Parents) and relief staff start a comprehensive training program to focus on the changing needs of our children.

1996: Plans are initiated to pilot an Independent Living Skills Program for older youth who have completed their adolescent years at Boys and Girls Country. The Independent Living Skills Program is later renamed the College and Career Program. Thanks to generous continuing scholarships, all students who graduate from high school at Boys and Girls Country will now have the opportunity to be sponsored through trade school or college and into a first job.

1998: Boys and Girls Country launches a $6 million capital and endowment campaign to enable capital improvements to the campus as well as strengthen our endowment — a vitally important step in ensuring the financial health of our Home.

2006: The capital campaign concludes with the dedication of the Operations Center in February. The College and Career Campus is renovated in June and July to add housing for 17 new graduates from the class of 2006.

2008: Due to decades of wear and damage from Hurricane Ike, the 30 year old gym has to be shut down. This blessing in disguise leads to renovation of the campus infrastructure, including improved roads and drainage. Construction of the Penny Loyd Student Life Center also begins.

2010: The original 30-year-old gym is demolished and plans are made for a campus park on the land where the gym stood. 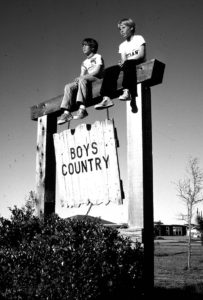 2011: New playgrounds are constructed, security lighting is installed, the old pavilion is converted into storage for teaching parents, half-court basketball courts are installed in the courtyards between our cottages, and campus irrigation and landscaping are completed.

2014: The first Master’s Degree is celebrated when Amy receives her MS from Sam Houston State University.

2015: Ground is broken on the first of of 11 re-built cottages on campus in order to provide new, energy efficient cottages with the improvements we desperately need for our children and our teaching parents.

2016: The 45th Anniversary celebration included the dedication of a memorial to the founders, Tommy and Jean Robinson. The entire campus dedicated the first of 11 new cottages, the Watford Cottage, in November, and the cottage family moved in to their new home.

2017: Ground is broken on the Hamill Foundation Cottage.

2019: Ground is going to be broken on the new Woodforest Charitable Foundation Cottage.

2020: In September 2020 the fourth cottage was finished and dedicated. BGC was blessed by the generous investment from the Woodforest Charitable Foundation which made this new home possible. Partners in this cottage rebuild include Woodforest National Bank, HomeAid Houston, Empire Communities, Ziegler Cooper, Greater Houston Builders Association (GHBA), and several other vendors who donated materials, labor and services. Everyone was thrilled to celebrate this cottage’s completion despite various hurdles along its way, including COVID-19. For the first time, the cottage dedication was broadcasted to various constituents in video form. The ceremony can be viewed on the BGC YouTube channel through this link.